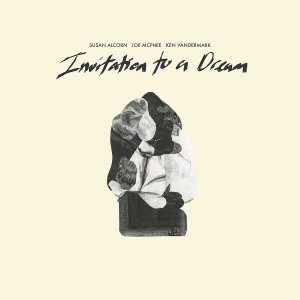 Each highly regarded as individual players, Susan Alcorn, Joe McPhee and Ken Vandermark have thrown their lot in together for the first time on Invitation to a Dream. It is an understated beauty.

The three are not complete strangers. Alcorn (on pedal steel guitar here) and McPhee (soprano saxophone and pocket trumpet) first played together at Louisville, Kentucky’s Cropped Out festival in 2016. McPhee has also played with Vandermark (tenor saxophone and clarinet).

This trio lineup is a first though. All the more reason to marvel at the result of this inspired session. The album opens with its title track. First, the horns. Gentle and airy. Soon, the pedal steel guitar joins in and it’s clear there’s something to this unorthodox lineup.

Remarkably, we’re not just hearing the band’s first session. The recording of this song is their first time playing together. Ever.

What follows is 11 ½ minutes of delicious, ultra-slow-building intensity.

Astral Spirits’ Nate Cross describes his experience bringing these artists together as “the most exhilarating and rewarding” he has enjoyed.

“No warm up improvisations, no false starts – just pure magic from the start,” he writes in the album’s notes. “Being able to sit in the studio with them while this record was created was a truly unforgettable moment in my life.”

The album’s pacing ranges from Jon Hassell to Ornette Coleman. Even when veering toward the frenetic though, it never feels rushed. There’s a kind of quiet calm about this trio that makes even the album’s more difficult sections palatable. The intricacy is there, but it all unfolds smoothly and with great care.

One additional note of interest. The original plan was for McPhee to join Alcorn and Vandermark with his tenor saxophone. Instead, he opted for his soprano sax and pocket trumpet. It’s difficult to imagine a better result than this.