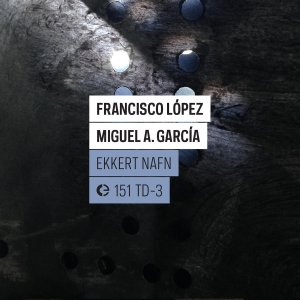 Artists who produce instrumental music – or to put it more precisely, music that doesn’t feature vocals – are often asked how they decide on titles. At the risk of sounding elitist, that always struck me as one of the dumber questions in music journalism. Sure, not all music lends itself naturally to a pithy title. But obviously the absence of lyrics doesn’t render the artist incapable of describing what he or she set out to communicate.

A new split disc by Francisco López and Miguel A. García appears to have struck a compromise. The album’s title Ekkert Nafn translates as “No Name.” Here’s to pragmatism.

The first piece, “Untitled #351,” is composed by López. The artist has built an impressive body of sound art and experimental music over four decades. López’s work has been enthusiastically received in more than 70 countries. He’s received four honourable mentions at the Ars Electronica Festival competition, and a Qwartz Award for best sound anthology.

This new work has an industrial feel. His source material is largely metallic and abrasive. Those sounds are processed, and then offset with stretches of quiet, or even silence. These breaks temper the overall harshness of the piece. But they also add tension, as we wait apprehensively for what comes next.

The second half of the disc features García’s “Applainessads.” Also known as Xedh, the Bilbao, Spain-based sound artist is best known for his work in electroacoustic composition and improvisation. García has performed his work in Europe, the U.S. and Asia. He’s also appeared on more than 100 recordings.

“Applainessads” hums like hydro wires stretched over an open field. After a kind of white-noise opening, the piece turns increasingly minimalist as its 28 ½ minutes plays out. The effect is serene, but not quite comforting.

The two works complement one another nicely. Both feature sounds associated with the 20th century, processed with the intention of producing 21st century art. At the same time, there are sufficient differences between the two to make the shared album work.

The evolving ease of “Applainessads” is a welcome response to the tension built up by “Untitled #351.” García’s fluidity is an absorbing contrast to López’s banging stops and starts.

One thought on “Francisco López and Miguel A. García – Ekkert Nafn”