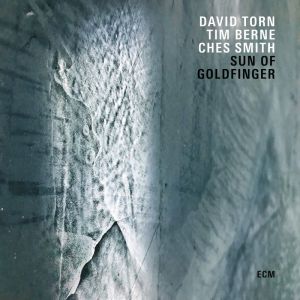 Respected guitarist David Torn is back, this time out with added electronics and live-looping. He’s joined on Sun of Goldfinger – his first for ECM since Only Sky in 2015 – by Tim Berne on a scorching alto saxophone and Ches Smith on drums and electronics.

The album offers three new tracks, each of which runs between 22 and 24 minutes. The music is at various times driving, frenetic and elaborate.

“Eye Meddle” gets things started with crunchy electronics set alongside Torn’s guitar. It fades out and then back in again while Berne and Smith turn up the volume. Less than two minutes in, the trio has built an impressive racket. Intense, occasionally difficult, but sufficiently rich in detail that you can’t wait to hear what comes next. Berne’s performance is astounding.

“Spartan, Before It Hit” is next. The trio is joined by Craig Taborn on electronics and piano, guitarists Mike Bagetta and Ryan Ferreira and the Scorchio String Quartet (director and violist Martha Mooke, cellist Leah Coloff and violinists Amy Kimball and Rachel Golub).

The strings are a distinguished addition. In some respects, they feel like a contradiction to what we’ve just heard on track one. And to be sure, their prominent role early in this second piece is less than easy listening. The ensemble finds its groove though (I’m using that term loosely), and by the time the players hit a heart-pounding crescendo eight or so minutes in, it’s clear they’re onto something big.

Berne delivers an emergency-vehicle-siren wail to get us into track three, “Soften the Blow.” He does nothing of the sort. Torn layers a lovely guitar solo over top, but that does nothing to lessen the intensity.

Like “Eye Meddle,” the trio improvised this recording. The volume rises and falls, as if in recognition that the listener has by this time earned a break. But it packs the same punch tracks one and two do.

No question Torn deserves top billing on this disc (if for no other reason than his international reputation). But Berne and Smith are every bit as powerful.

The trio has been performing live, also under the name Sun of Goldfinger. LondonJazz described them as “dangerous,” after taking in a set, a term too seldom heard in jazz clubs.