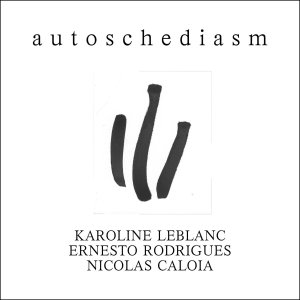 This powerful new disc from Karoline LeBlanc, Ernesto Rodrigues and Nicolas Caloia is true to its title. Autoschediasm isn’t just a synonym for improv. According to Oxford, its use suggests “something done on the spur of the moment or without preparation; a hasty improvisation.”

It is certainly all of that. This is Cecil Taylor-level intense. Times three.

The album feature Karoline Leblanc on piano, Ernesto Rodrigues on viola and Nicolas Caloia on double bass. Leblanc and Caloia are both Canadians. Rodrigues, who brings the most extensive discography to the project, was born in Lisbon, Portugal.

Leblanc earned a reputation for herself as a concert pianist in the 1990s, premiering a number of Canadian composers’ work. As the decade wore on, she found herself drawn to less structured music. Since 1998, Leblanc has been best known for her complex improv style.

In addition to being a respected double bassist, Caloia is a composer, band leader and artistic director of the Montreal production company Musique rayonnante. He composes and performs with both chamber ensembles and orchestras.

While Rodrigues is clearly gracious enough to place himself second on this album’s bill, he is the group’s main attraction.

His 40-year career has earned him a following that includes lovers of contemporary, free jazz and other improvisational music. An accomplished violinist and violist, Rodrigues says electronic music was a major inspiration early in his career. He’s known to leverage instrument preparations and micro-tuning in his work.

All of the performers shine on this exhilarating three-part disc. Its range extends from quiet intensity to hang-on-to-your-hat. Remarkably though, it never overwhelms. The performances are entirely complementary to one another. autoschediasm is the kind of recording that makes us optimistic about the future of classical music.