The Art Ensemble of Chicago and Associated Ensembles 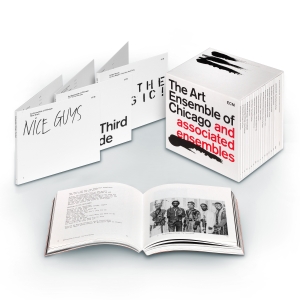 Last spring, I asked Kronos Quartet founder David Harrington if the group had plans for its upcoming 50th anniversary. “We haven’t really thought about it yet,” he told me. In fairness, the landmark is still five years away for the classical music rock stars.

Smartly packaged, ECM Records has paired the box with a 298-page booklet of album notes, photography and more. It’s a devoted, fitting tribute from the label that will celebrate its own 50th next year.

The set includes five discs from The Art Ensemble of Chicago (Nice Guys, Full Force, Urban Bushmen, The Third Decade and Tribute to Lester), one from Leo Smith (Divine Love), four from Lester Bowie (The Great Pretender, All the Magic! along with I Only Have Eyes For You and Avant Pop from Bowie’s Brass Fantasy), four from Roscoe Mitchell (Nine To Get Ready, The Transatlantic Art Ensemble: Composition/Improvisation Nos. 1, 2 & 3, The Note Factory: Far Side and Bells For the South Side), one from Evan Parker (The Transatlantic Art Ensemble: Boustrophedon) and three from Jack DeJohnette (New Directions, New Directions: In Europe and Made in Chicago featuring Muhal Richard Abrams, Larry Gray, Roscoe Mitchell and Henry Threadgill).

The impression that these great artists have left – in their various groupings – is well-documented. Their collective catalogue has a timeless quality that has earned them an adoring global audience. More than that. It has helped define avant-garde jazz as a significant artform.

Yet despite all that reverence, and for all the solo and side projects, the ensemble has remained a collective. In its 1982 coverage of Urban Bushmen, Musician reported that the album “demonstrates, as clearly as any album they’ve made, what a five-brained band this is – no single musician dominates or is left alone for long at the controls, but everyone gets to shine.”

Projects don’t last half a century by accident. This shared output we’ve been treated to since Jimmy Carter was president is one of the great stories of America’s artform.