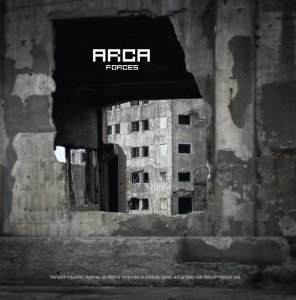 It used to be said that the best way for an artist to know if they’d got their new album right was to listen to a cassette copy in the car. Given the large percentage of listeners that would hear their music behind the wheel, it was the best possible soundcheck.

Car audio has come a long way since those high-bias days. Presumably today’s equivalent would be how an album sounds on a mobile device without headphones.

If that’s the case, check out Arca’s latest 13-track effort Forces. As bright and lush as it sounds on my Sony MDRs, it is just as satisfying on my iPad. While I suspect that has to do with its minimalist composition and ample use of high-end, it’s still no small accomplishment.

Forces is the first we’ve heard from France’s Joan Cambon and Sylvain Chauveau in eight years. Its subject matter is a serious one: “13 tracks about people living in conflict zones around the Mediterranean over the last 40 years” according to the album’s notes.

The work is intense at times, but positively so. You’d expect a degree of bleakness or austerity, given the theme. There are a few dark moments, no question. But on the whole, this new material is uplifting. The primary sentiment is thoughtfulness. We’re being asked to consider an important question – the nature and effect of war – in a productive manner.

More from the notes: “Forces is not a manifesto and does not claim to be one. It is a simple sensory reflection, a desire to create a bridge between great war and intimate war and capture the hidden life deep within the testimonies of voices and traumatized bodies.”

Both artists have successful careers outside of Arca. Chauveau writes soundtracks for Sébastien Betbeder films. He’s done the same for Thomas de Thier and for a number of other collaborators. In addition to Arca, Chauveau is a member of 0 (with Stéphane Garin, Joël Merah and Maitane Sebastian) and On (with Steven Hess).

Cambon is a musician, producer and sound engineer. His soundtracks have accompanied theatre and contemporary dance works. His first solo album dropped in 2011: another soundtrack for a performance piece by Aurélien Bory for an industrial robot and two actors.