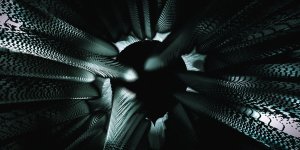 Electronic music producer Nick Sutton has partnered with Matthew Faulkner and Scott Darby on an ambitious project that occupies the extremes of both electronic and new classical music.

Musical preludes have traditionally served as an introduction to some larger composition. While Sutton’s are all conventionally brief (the longest runs 3:19), these are no mere appetizers.

“Prelude 1” opens the album with a sharp, abrasive buzz of electronics. If Sutton’s goal was to throw down the equivalent of a musical gauntlet as early as possible, mission accomplished. Ten seconds in, it’s clear this is a hold-onto-your-seats album.

Sutton’s half continues in similarly severe fashion. The brevity of each piece contributes to the set’s intensity. These seven works are less compositions than they are declarations.

All of which is to say that Faulkner had a lot to work with, and a lot to live up to on his half of the album. His work is no less exciting and not the least bit derivative.

You’ll recognize the source material, but that’s all. Just as a pair of solo piano compositions consisting of the same dozen notes will sound only vaguely similar, the two composers’ contributions are only loosely connected.

Faulkner’s work here is equally textured, but less coarse. He’s transformed the electronics featured in the prelude series into noise collages. They’re just as often soothing as they are horrifying.

Sandwiched between the preludes and renders are two presentations of the raw sounds used. They’re surprisingly listenable, assuming you’ve developed a taste for digital detritus.

Presumably though, they’ve been included to inspire additional iterations from other artists. In that sense, Sutton’s preludes are exactly that – an introduction to multiple interpretations of his work.