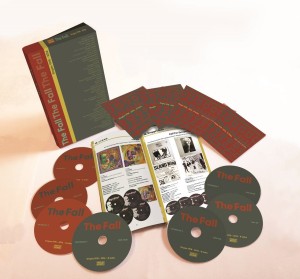 Is there any voice that captures the long and celebrated musical history of Manchester the way Mark E. Smith’s has? Its coarseness. Its monotone I-don’t-care-what-you-like implacability. Smith, through sheer force of stubbornness, has turned the vibrant but short-lived post-punk period into a life’s work.

Four decades on, his genius has finally been well and truly documented. Cherry Red Records has added to its strangely beautiful reissues catalogue with two boxsets from The Fall. The first packages the band’s singles on three discs. The second adds B-sides and more, assembling a nearly eight-hour, 117-track box.

For the uninitiated, Smith must first be understood in the context of the scene that produced him. Late 1970s England buzzed with energy following the 1976 punk explosion. In contrast to the wretched state of the country’s economy (and to some extent, as a result of it), music became England’s most significant – and certainly most influential – export.

The Fall shared stages with many of the period’s giants: Joy Division, Cabaret Voltaire and on and on. Smith’s uncompromising artistry is every bit as important as more celebrated heroes like Ian Curtis and John Lydon. He has not received his due.

But of course, there’s more to the story. Unlike almost all of his contemporaries, Smith kept going. He’s produced a body of work that is Jagger-Richards-like in its scope. More than 30 studio albums. And a full 100-plus-title discography that includes live albums and more.

The sheer bulk of his output and its influence on generations of young musicians over the years is in and of itself a great story. The fact that The Fall is as unbendingly rock-and-roll in 2016 as it was in 1978 is a cruelly under-appreciated slice of post-punk’s legacy.

Ten favourites (in no particular order):