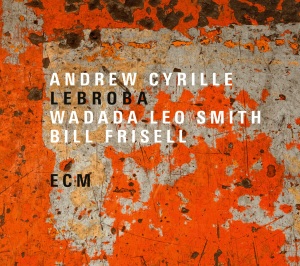 Each of these three remarkable players can date his relationship with ECM Records back to a time when the distinguished imprint’s product was in fact primarily delivered on vinyl. Andrew Cyrille debuted first, drumming on Marion Brown’s Afternoon of a Georgia Faun in 1970. Trumpeter Wadada Leo Smith followed in 1978, headlining the well-received Divine Love. A year later, Bill Frisell made the scene with his guitar on Eberhard Weber’s Fluid Rustle.

Together, they’ve produced a tutorial on how to make free jazz accessible to a broad audience. First thing that will strike you is the album’s luxurious timing. Its easy, meandering pace wraps the trio’s bold performances in a warm, almost dinner-time jazz vibe. The work is too advanced for that label, but don’t be surprised if one or two adventurous program directors find a way to slide these titles into the mix.

Next is the album’s only improvisation: “Turiya: Alice Coltrane Meditations and Dreams Love.” The 17½ minute effort is not exactly the album’s centerpiece, but it does represent all that is great about the trio’s interplay. If there was any doubt about the decision not to add a bassist to the group, this small masterpiece sets us straight. It’s not often we get to hear such richly detailed performances presented in such an uncluttered setting.

The album’s title track has been compared to Charles Mingus’ “Goodbye Pork Pie Hat,” melodically and I would add sentimentally. That is not to suggest nostalgia. Both tracks share a progressive, warmly comforting feel.

“TGD” and “Pretty Beauty” complete the proceedings. The former with a fascinating bit of electronics added to the mix, and the latter with a heartbreaking Smith performance.

The album’s final track is an instant jazz-ballad classic. Smith’s muted trumpet is all quiet passion. Complemented as it is by Frisell’s gentle strumming and Cyrille’s masterful brushstrokes, “Pretty Beauty” is an unshakeable conclusion to a deeply satisfying new album.