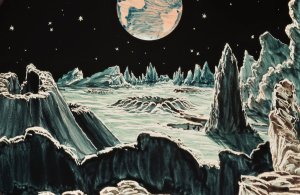 Nico Walser has produced a second volume in his “music of water, wood and bones” trilogy. Guide to the Sunken Citadel follows the March release of Ghosts of Forsaken Ships.

These six new tracks have been described as both new classical and ambient. I hear a lot more of the latter, which is not to suggest that the compositions are any less evolved. Like its predecessor, the new disc is a great headphone listen.

At times, the work is elaborately nuanced. Just as often it is big-screen cinematic. “Alluvial Land” is a good example of that broad scope.

It opens with layers of quiet synthesizer. Imagine a babbling brook running across a windswept plain, but not literally. Instead of imitating the scene, Walser translates it. The effect is pleasingly understated (and not a bad interpretation of the track’s title).

Just under four minutes in though, a beat is introduced. The piece builds dramatically, closing in a full-synth gallop.

When Walser goes big, he often does so in the style of 1980s-era electronic music. It’s a sort of hat-tip to the genre’s pioneers that we’re hearing a lot of recently. Born in 1965, Walser is old enough to remember those giants firsthand. And while none of this new work may be intended as a tribute, it works on that level with real authenticity. The album’s title track is exhibit A.

Fans of Walser will know that Giant Skeletons is not his only project. He first earned a significant audience with his band Weltempfänger. He’s also the man behind a pair of trip-hop albums under the name Code Blue.