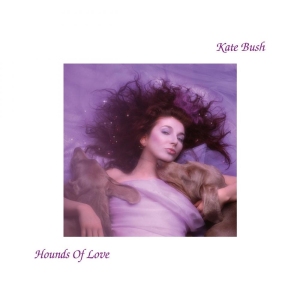 Kent, England’s beloved Catherine Bush turns 61 today. After a half-century of songwriting, the artist can look back proudly on a career that has balanced commercial success with the respect of both critics and admirers of sophisticated pop music. We can only hope there’s more to follow.

Meantime, a plainly subjective take on her 10 studio albums. Each is exceptional in one way or another.

1. Hounds Of Love (1985). Bush’s fifth disc was an international sensation. The album’s lead single “Running Up That Hill (A Deal With God)” opened side one, followed by “Hounds of Love,” “The Big Sky,” “Mother Stands for Comfort” and “Cloudbusting.” Four of those five tracks were hits. But what set Hounds apart was the album’s second side, labelled “The Ninth Wave.” Bush said it was “about a person who is alone in the water for the night. It’s about their past, present and future coming to keep them awake, to stop them drowning, to stop them going to sleep until the morning comes.” At the same time she was producing her most accessible work, Bush produced one of the decade’s most advanced concept pieces. And she had the chutzpah to package it all together.

2. Never For Ever (1980). Bush launched the decade she’s most often associated with by topping the album charts for the first time in her career. In the U.K., the album made her the first woman to own the country’s album chart. Its significance wasn’t limited to record sales though. It was her first go at incorporating synthesizers and drum machines, including the Fairlight CMI. The Fairlight organization debuted its “Computer Musical Instrument” one year earlier. The digital synth/sampler/audio workstation went on to virtually define the decade.

3. The Dreaming (1982). Bush was back with her Fairlight two years later. Despite embracing state-of-the-art tech, Bush also wrote for mandolin, uilleann pipes and didgeridoo. At the height of the new wave movement, she dropped one of the period’s most progressive, challenging pop records. The album features vocal loops and polyrhythmic percussion, which combines multiple rhythms performed simultaneously. Among the album’s engineers was Nick Launay, who’d also worked with John Lydon’s Public Image Ltd. (a band not unfamiliar with complex percussion).

4. The Kick Inside (1978). Bush had already done enough songwriting by ’78 that she was able to release two albums. This, her exquisite debut, landed in February. It is best known for “Wuthering Heights,” which enjoyed a renaissance eight years later with the release of her anthology The Whole Story. She was just 18 when she penned it: in one evening according to her own account. As if that’s not sufficiently impressive, she wrote “The Man With the Child in His Eyes” from the same album at 13.

5. Aerial (2005). Bush’s first double album can be seen in a similar light to the two-parter Hounds of Love. The first disc, “A Sea of Honey,” features seven unconnected tracks. Among them is the lovely “Bertie,” named after the son she’d cared for during her 12-year absence from the industry. “A Sky of Honey” is the second disc’s title. It delivers a nine-piece set built around a single summer day. This may fall in the middle of our ranking, but that it not to say it is anything short of dazzling.

6. 50 Words For Snow (2011). Our woman for all seasons turned to winter on this most recent effort. The seven-track recording is long on melancholy and storytelling. (Very long, in fact. Two of the cuts stretch past the 10-minute mark.) A marvelous duet with Elton John – whose voice is more deeply resonant here than his fans are used to – tells the tale of a pair of soulmates whose lives intersect repeatedly.

7. The Sensual World (1989). This one’s best known for including “This Woman’s Work,” which anchored the soundtrack to John Hughes’ She’s Having a Baby one year earlier. In fact, it is a lush, at times sad collection of exquisitely penned songs. “Deeper Understanding” tells the story of a woman who has become so attached to her computer that she’s lost touch with the real world. (Not exactly prescient, but certainly ahead of the curve.) Trio Bulgarka, the Bulgarian vocal choir that earned international fame as part of the world-music movement in the late 1980s represented the sound of the computer. Mick Karn performs a sparkling fretless bass on “Heads We’re Dancing.”

8. Lionheart (1978). Not fully appreciated at the time, coming as it did just 10 months after her February debut. Still, there’s no such thing as a poor Kate Bush effort. “Symphony in Blue,“ “In Search of Peter Pan,” “Wow,” “Don’t Push Your Foot on the Heartbrake” and “Oh England My Lionheart” all stand up.

9. The Red Shoes (1993). This one came at a difficult time for Bush, who had suffered a number of personal losses. The track “Moments of Pleasure” is a tribute. The album features contributions from Prince, Eric Clapton, Procol Harum’s Gary Brooker and the aforementioned Trio Bulgarka.

10. Director’s Cut (2011). The much-discussed reworks album. We get new recordings from The Sensual World and from The Red Shoes. In some cases, the material has been completely redone. In others, pieces of the original remain in place.