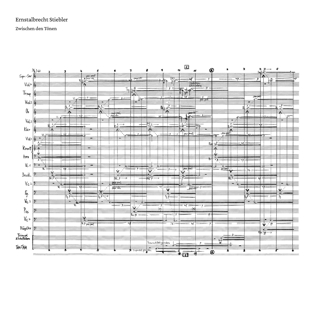 The man who said: “Music is too important to burden it with emotions,” celebrates his 85th birthday with a concert and record-release celebration this evening in Berlin. Ernstalbrecht Stiebler – born Mar. 29, 1934 to be precise – will be among the performers.

Stiebler’s latest features four works, all of them in keeping with his long-standing commitment to minimalism and reductionist contemporary music. The German composer is quick to point out that he does not produce minimalist music. The reference there is to minimalism in visual art, which has served as an inspiration for his repetitive, unemotional compositional style.

To study music in Europe, beginning in the late 1950s, meant coming of age in a genuinely modern era. Experimentation and progress weren’t just the goal of students, they were the expectations of teachers. During his time at Ferienkurse in Darmstadt from 1958 to 1961, Stiebler studied with one of the 20th century’s great masters, Karlheinz Stockhausen.

He focused on serial music at first, before leaving that behind for reductionism. This new release offers striking examples of what it means to take a world of complexity and reduce it all to the bare essentials. The more attentively you listen to Zwischen den Tönen – which translates as Between the Notes – the more movement you will find in its stillness. It is a 76-minute high-wire act.

Stiebler earned multiple prizes in the years following his studies. He was director of new music at Hessischer Rundfunk from 1969 to 1995. In 1989, he built the concert series Forum Neue Musik. He also earned co-production credits on a number of Hessischer Rundfunk CDs, including a series on the New York School that featured John Cage, Morton Feldman and Christian Wolff.