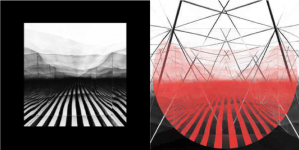 David Koch dropped a pair of new DeWalta releases yesterday, one of which premiers a new offshoot of his Meander label called Horizon Pi.

Koch’s work offers a level of sophistication too seldom found in house and techno. Presumably that has something to do with his early exposure to more traditional forms of music. He was a French hornist at the age of six, later turning to the saxophone and a string of gigs at a local German jazz club with the local grown-ups.

DeWalta has earned a reputation for cool, minimal beats and a rich compositional touch. Both are clearly evident here. The length of the tracks on Lyra give him sufficient airtime to present big ideas expansively. Despite its scale however, the album works better as a headphone than a nightclub experience. There’s just too much detail here to let ambient noise get in the way.

Speaking of ambient, Lyra π offers a good deal more than the standard electronic drones. “North Star” is as much Philip Glass as it is Brian Eno. “Fugacity” is even more dense.